This is Going to Get Cheesy

In 2015, when we launched The Storyhive, we had just quit our ‘real’ jobs and were eager to grow our business. So most out-of-town trips frequently turned into meeting as many potential customers as possible. That often meant we skipped first and second lunch as we fought traffic to get from one side of a city to the other.

On one particular trip to San Francisco, Jena had booked Tom and Alex on a red eye flight from Houston to do a location scout, shoot and client meeting-- all on the same day. Their day wrapped at 7 p.m. and they found themselves at an Irish pub across the street from the downtown San Francisco location of their last meeting.

So what’s the most appetizing dish at an Irish Pub in Northern California? It’s probably not a quesadilla but they ordered it anyway. And what were Tom and Alex served? Nachos, of course. It was complete with store-bought, slightly frozen guacamole.

We found it so hilarious that we decided to create a quesadilla coffee table book that included reviews (good, bad, or ugly) of the cheesy dish we sampled in states and countries where Hivesters worked.

We established some ground rules for a quesadilla to be included in the book:

Surprisingly, we traveled often for work during our first few years in business, which meant we ate a lot of quesadillas.

The quesadilla challenge became so much a part of our company culture that clients joined in the fun, suggesting restaurants and rating the meals.

Freelancers who we were lucky enough to break tortilla with also joined. Sean Horejs and Anderson Castro provided detailed reviews of the quesadillas they consumed.

In most cases, our team shared one quesadilla but when our group was large, we ordered multiple types of the dish -- quesadillas stuffed with vegetables or meat, for example.

We tried to give each state a chance to convince us their chefs could prepare an authentic, cheesy-licious dish.

So unless absolutely necessary, we avoided eating the meal in an airport, for example. Apologies to New York and Washington state... your airport quesadillas were all we could manage to eat during quick trips.

An unexpected layover in Washington, D.C. meant an opportunity to see our friends Robin Beal and Nicholas Roebuck… and to eat a quesadilla at Capitol Brewing.

So where have the quesadillas been consumed:

WHO IS THE CHEESIEST?

Forks down, Zacatecas Mexican Grill , a restaurant in Neenah, Wis., was the best quesadillas on our journey. Wisconsin is America’s cheese state. It makes sense Wisconsin would be the big cheese. Zacatecas Mexican Grill is located inside a historic downtown Neenah building. Years later, Jena and Anderson tried to recreate the magic of the Wisconsin quesadilla while they were on a shoot in Milwaukee, but they were disappointed by the version they ate in a downtown restaurant.

My worst quesadilla is easily the one from an Oklahoma hotel. I was asleep when Alex and Tom texted that they had ordered a ‘quesadilla.’ I rushed downstairs only to find it was a chicken dish wrapped in a seasoned flatbread and accompanied by a ranch salad dressing. It’s hard for me to see flatbread and ranch dressing even years after that culinary nightmare. My favorite quesadilla was one consumed in Tijuana. We spent one night there after shooting footage in a maquiladora, and were eager to add a real Mexican quesadilla to our list. Topped with mole sauce and accompanied by chunky guacamole, it did not disappoint.

I think the best quesadilla I had on the road was surprisingly in Rapid City, South Dakota. On a scale of one to 10, Matthew and I decided that it was a South Dakota seven, which equates to a Texas four. By far the worst quesadilla experience goes to the state of Wyoming (go figure, right?). I pride myself on being able to eat pretty much anything, but I draw the line when the chicken is still wet from being boiled beforehand. There are many things a quesadilla can be, but soggy is not one of them.

My first Hive quesadilla was an unfortunate airport experience in Las Vegas, in 2017. Alex and I had time to eat before our flight and I thought this was the perfect opportunity to join the cheesy movement! But all I got was a cheeseless tortilla filled with dry chicken, bland pico and salsa on the side. There wasn’t even guacamole to water it all down! I gave it three out of 10. To top it off, I was told Nevada was already accounted for in the book, so my sacrifice was pointless :(

Flashforward to April 2020, I rose to the challenge and perfected a quarantine *mushroom* quesadilla here in Calgary! The hivesters would be proud!

On one of our many Storyhive trips, we found ourselves in Spartanburg, South Carolina. Of course, when we do interviews, my first question is always ‘where should we eat lunch?’ On this particular day, everyone had the same answer, El Cazador, which means ‘the hunter.’ The idea of checking off another state on our quesadilla adventure appealed to me but having done this all over the country my expectations were low. As I reluctantly walked into the restaurant I was greeted in Spanish and was seated in a full dining room. My anxiety started to lower. On the menu not only was there a solid selection of what looked like legitimate quesadillas but there was also my go-to dish at Mexican joints in Houston, chile relleno. At this point, I could not contain myself and was ready to eat! When the food came out my expectations were surpassed and my hunger satiated. The only thing better was the company that day in Spartanburg, South Carolina.

My only Storyhive quesadilla experience was in, of all places, Louisville, Kentucky. Widely known for birthing the world’s most famous fried chicken (“best” is a discussion far removed from this blog), its citizens’ love for beer cheese and something called a “Hot Brown”. I’ll let your imagination stir on that last one for a bit while you decide whether to Google it. Matthew, Tom and I bypassed all of that to scratch Kentucky off the quesadilla list and stopped at Bandido Taqueria Mexicana on University Boulevard. We didn’t know it at the time, but this little spot is owned by transplants from San Diego, which probably would have given us more confidence in ordering, but we went for the carne asada quesadilla without too much trepidation. We didn’t walk away saying “put that one at the top of the list”, but it did the job and the service was good so you can’t argue with that. We actually used the stop as an appetizer before hitting up another restaurant, because even though you wouldn’t know it by our sizes, the three of us can pack away quite a bit of food. 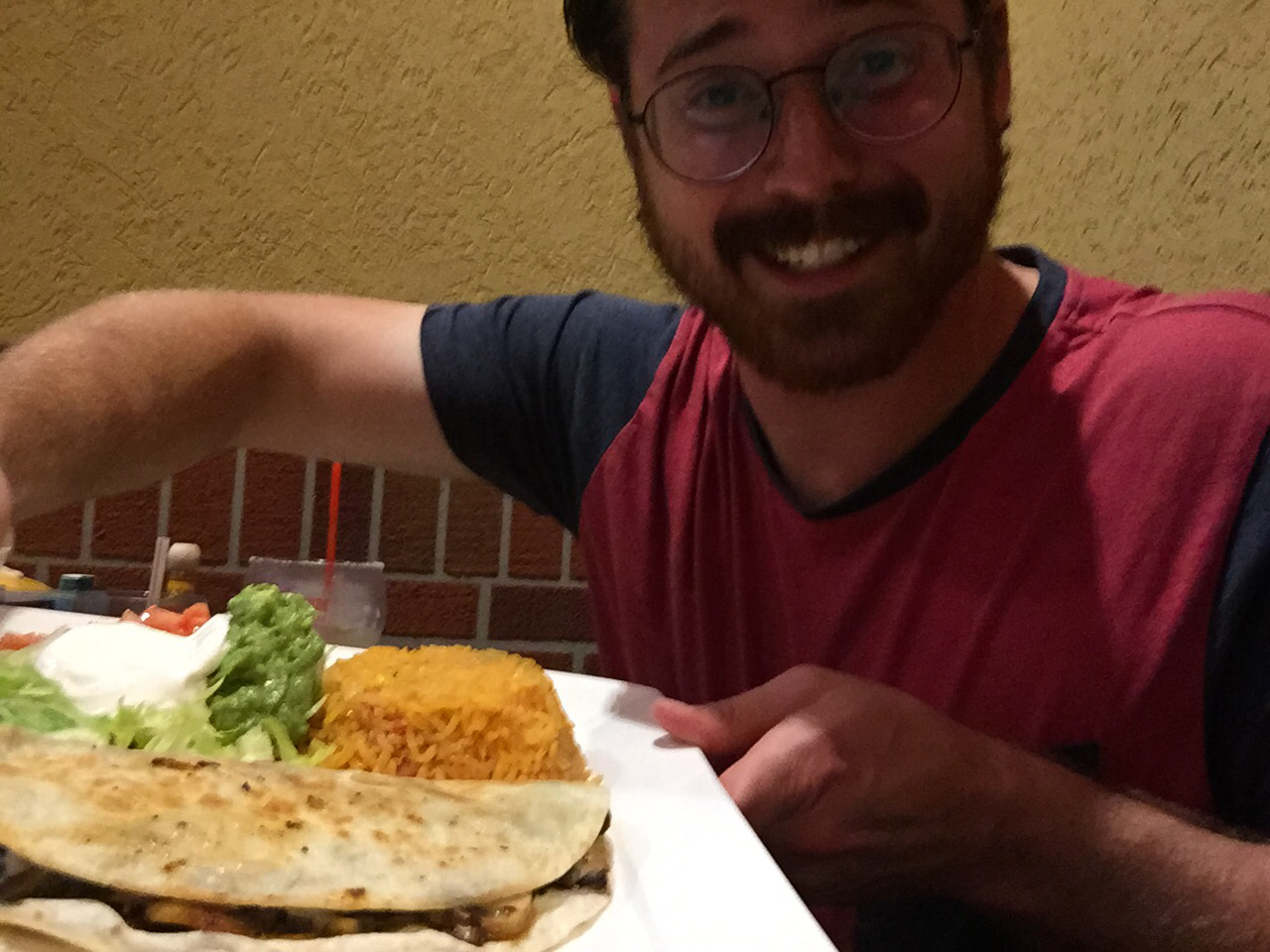 Half A Hive Year

The Storyhive introduces Buzz the Bee!